In one minute, you can learn about the structure of the arcade Pinball game machine

Second: Casing head
The box is the highest part of the game console. It is on the front. It is a rectangular translucent step. There may be lights or speakers inside, and there is a casing head sticker on the outside to indicate the name and content of the game. Between the surface of the box and the recessed part of the head of the frame, it is generally installed with the speaker.

Third: the surface of the box
The surface of the box is used to display the display. It is located in the middle of the front section of the box or in a vertical position outside. An inclined or vertical display is placed inside. The shell is in transparent plexiglass. The board may have game-related stickers.
Fourth: Control Panel
The control panel is equipped with joysticks, game keys, knobs, games, trackball or tablet flick gun games, located in the outer box under the front abdomen and right abdomen. The control panel integrates control functions. In the game, the game is Interactive input mode. 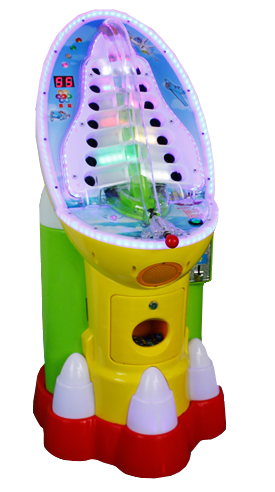 Box is positive in the lower half of the game, and coins are installed in the middle or (and) work to put in or out of the game currency. Coins are only stored in the coin box, and the currency that enters the game will fall into it. These three devices are installed in the external grottoes and equipped with protective doors to ensure the completion of the main commercial interests of the game hall, as well as the consumption and reproduction process.

Seventh: Backboard
After the plate can be opened or removed, the box plate is located on the back of the console shell and is combined with other parts of the shell in a closed space to protect the internal components of the console. The box also distributes the function of heat generated after the plate making machine is running, and the safety of the game is very important.

Eighth: Flat box
The flat box structure is a relatively simple upright frame, shaped like a coffee table. The height of the game is very low. The viewing angle of the game needs to be viewed downward, so there is no so-called case head. The control panels at both ends are located on the edge of the surface of the box. The edges of the coin box and the coin box are not at the bottom of the box behind the box board. Because of the small size, these parts of the box body are compressed very small. The flat box has a special function, that is, the graphics can be flipped or bidirectional. In the early stage of singles matches, both parties can sit with each other and play together.

close
Start typing to see products you are looking for.
Call us